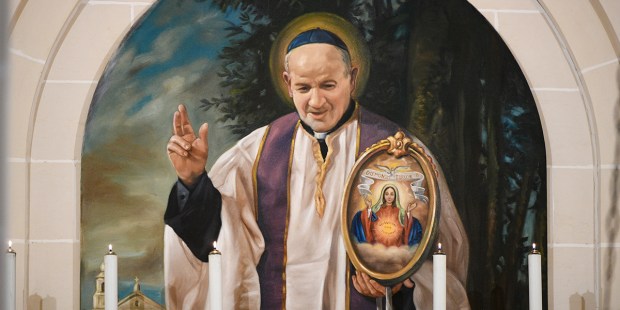 The boy became a saint and a great devotee of Our Lady of Mount Carmel, to whom he attributes his life and vocation.

Our Lady of Mount Carmel is loved throughout Europe, but in Malta devotion to her has been particularly strong for centuries.

There is a very well-known story regarding the shrine of Our Lady of Mount Carmel in Valletta, Malta, and a Maltese saint, St. George Preca.

On July 16, the feast day of Our Lady of Mount Carmel, when George was very young, he was walking by the sea and accidentally fell into the water. He probably would have drowned had it not been for a boatman rowing musicians across the harbor to join in the celebrations taking place in the Carmelite Church in honor of Our Lady.

The boatman jumped into the water and rescued the boy.

Years later, when George had become a young priest, he was walking past a nursing home when a nun informed him that one of the residents had died and that a priest was needed to administer the last rites.

The dying resident of the house was none other than the boatman who had rescued little George many years before.

Saint-Georges became a Carmelite tertiary and a great promoter of the brown scapular.

A curious detail about him is that he may have helped inspire St. John Paul II’s Mysteries of Light, as he had promoted five nearly identical mysteries decades earlier.