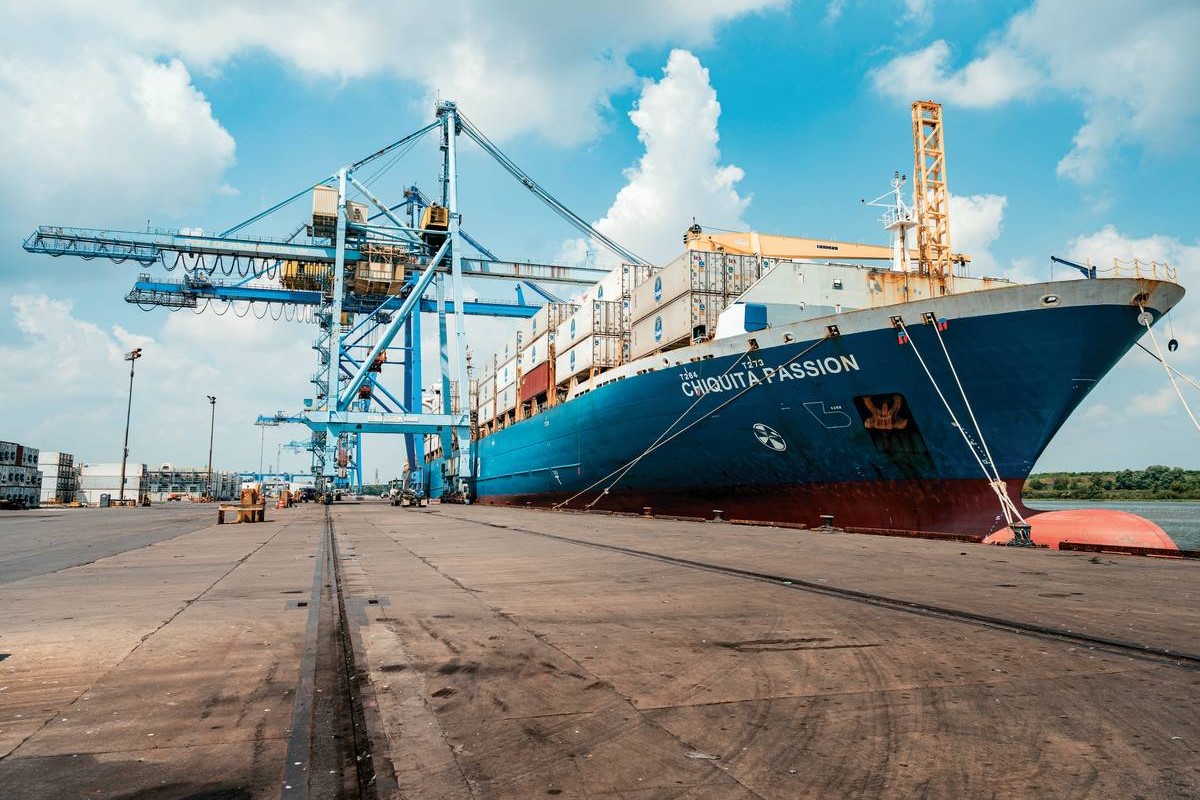 The past few years have been difficult for sailors and the Seamen’s Center is working to make the Port of Wilmington a comfortable place to stay.

It’s a warm, bright day as Christine Lassiter climbs the metal stairs that serve as a walkway to the deck of the Chiquita Dream, a 13-year-old container ship registered in Monrovia. The task of the ship is to transport fruit – mainly bananas – from South America to the port of Wilmington. Once unloaded, the cargo will be transported by truck to destinations in the eastern United States

“These vessels typically have a tight turnaround time,” said Lassiter, executive director of Wilmington Sailors Center (SCW), said over his shoulder. “This one arrived early yesterday, and it’s leaving at 1 a.m. tomorrow.”

Many of those working on the Chiquita Dream spend most of the year on the ship or temporarily in ports away from home, including during the pandemic. SCW, a small facility tucked inside the harbor gate, is sometimes their lifeline.

The past few years have been difficult for seafarers from all countries – hundreds who passed, mostly unnoticed, through the Port of Wilmington as ships were quarantined at sea by the spread of COVID-19 and blocked at the edge of overloaded ports. Their situation was similar to that of the old ships.

At the top, there isn’t much activity other than checking documents for boarding. “This ship comes in about every two weeks,” says Lassiter. “He now has a crew of 21. The captain is Polish, but the crew is mostly Filipino and Ukrainian, as is the case with many of these ships. I have a translation app on my phone.

Jethro Jade Manlangit from the Philippines plays a song for his shipmates.

After five years as an assistant to Joan Lyons, the former executive director, Lassiter is now in her third year at the helm of the largely volunteer organization. She has the business manner of someone who is easy-going and approachable, but also definitely responsible. “After 20 years managing contracts for a pharmaceutical company, there was concern that I was overqualified when I applied for the assistant position,” she says.

Wilmington is moderately busy for a small port, with an average of seven berths per week. With a typical crew of 24, this means around 170 sailors a week arrive in port. Although a few never leave the ship, some are such frequent visitors that they almost form a family relationship with some of the Seamen’s Center volunteers, friendly advocates who help them find their way around the harbor.

Much of the port’s inbound cargo is fruit, and much of the outbound cargo is automobiles, brought directly into the port facility from other states by rail. “There is also a dock for unloading juices… and one for gasoline, especially for Wawa, and an area for loading cars,” says Lassiter.

Operated by Gulftainer USA, Wilmington has become North America’s largest port for some of these goods and businesses (particularly Dole and Chiquita), as it is conveniently located within 200 miles of much of the East Coast population from Boston to Cleveland. in the Carolinas.

Ships arrive via the capes – where Delaware Bay opens from the Atlantic Ocean between Cape Henlopen and Cape May – or via the 14-mile-long Chesapeake and Delaware Canal from Chesapeake Bay. “We get an e-mail list of ship arrivals from the Marine Exchange in Philadelphia that projects for a month,” Lassiter explains, “and then, every morning, I speak with the Wilmington Tug dispatcher.”

Owned by the Rowland family, Wilmington Tug has been in operation since 1965, its chunky boats guiding huge vessels through the bay’s canals and to their berths in Wilmington and Philadelphia. There are two other ports in Delaware: one for the PBF Energy refinery in Delaware City and one in Claymont.

SCW itself is a modest one-story structure in the midst of all the massive storage warehouses, container ships that stand on multiple floors, and cranes that load and unload cargo. But its importance, like tugboats, outweighs its tiny appearance. 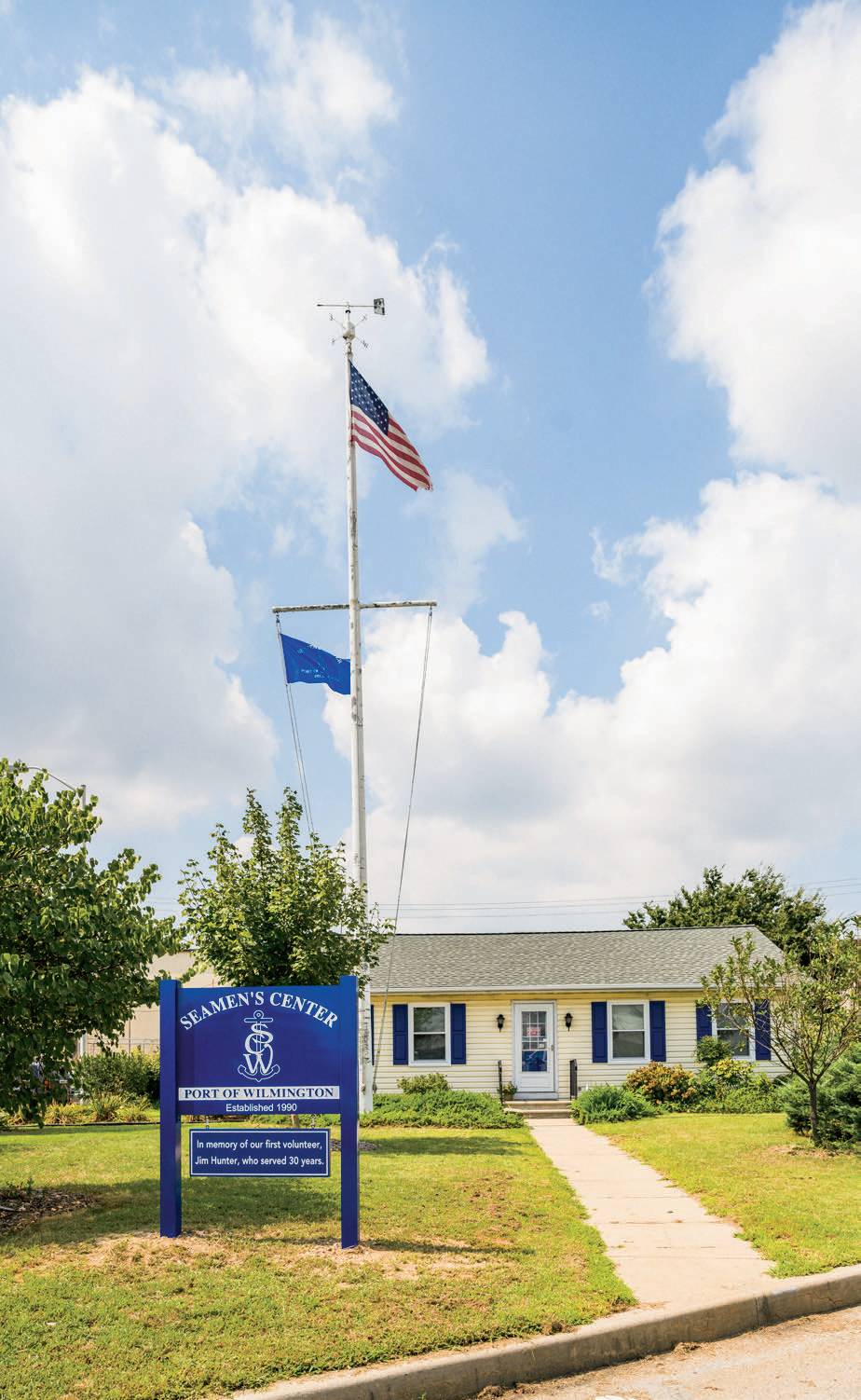 At the Seamen’s Center, sailors spend their time in port playing games, doing crafts and having fun.

From the outside, the center looks very much like a nondescript, double-wide modular home that would fit unnoticed into any working-class neighborhood. However, the outer edges of the property form a miniature flower garden, giving an attractive and welcoming presence to visitors.

“Our horticulturist, Joe Selvaggi, is a crane operator who loves horticulture,” says Lassiter. “He crashes everything for a reason.” The interior is sober but functional, with a circular pattern of small dedicated rooms. There is a store for essentials such as toiletries, much like those attached to a motel’s business office. “It’s no surprise that SIM cards are a big deal for them,” says Lassiter.

There is usually coffee and cookies; Free Wi-Fi and a place to go online; quiet areas and for telephoning; a living room; and a game room with a TV, pool table, puzzles, and games. There is also a free clothes closet. “A lot of these guys have never seen cold weather before,” says Lassiter. During the pandemic, the center received donations of DVDs and games as thanks for keeping the world supplied and running.

“Most of the crews were sequestered in their ships and couldn’t get off,” says Lassiter. “They were stuck.” The center acted in many ways as their agents, making personal purchases and serving as a temporary depository for things ordered from Amazon. “A lot of them are real sugar junkies,” Lassiter says, noting that one man ordered more than $100 worth of chocolate.

SCW has some 45 volunteers, many of whom are older and professionally trained. Once on board, they tend to remain active for many years, says Lassiter. Weekday hours are 9 a.m. to 9 a.m. and weekends are 9 a.m. to 4 p.m.

The center opened Jan. 1, 1990. A nonprofit corporation, funded by the port and the port community, Lassiter said. A fall fundraiser and two annual appeals help keep it afloat. There are about 800 seafarers’ centers around the world, and while Wilmington isn’t officially associated with any, “we work informally with other centers,” says Lassiter.

Because the facility is a point of entry into the United States, security is necessarily tight. The gates and all comings and goings are checked by US Immigration and Customs Enforcement, and ICE agents are visibly present. “Customs checks their passes ashore and checks them when they come and go,” says Lassiter, “and we have a shuttle service to and from the Price Corner mall every half hour.” 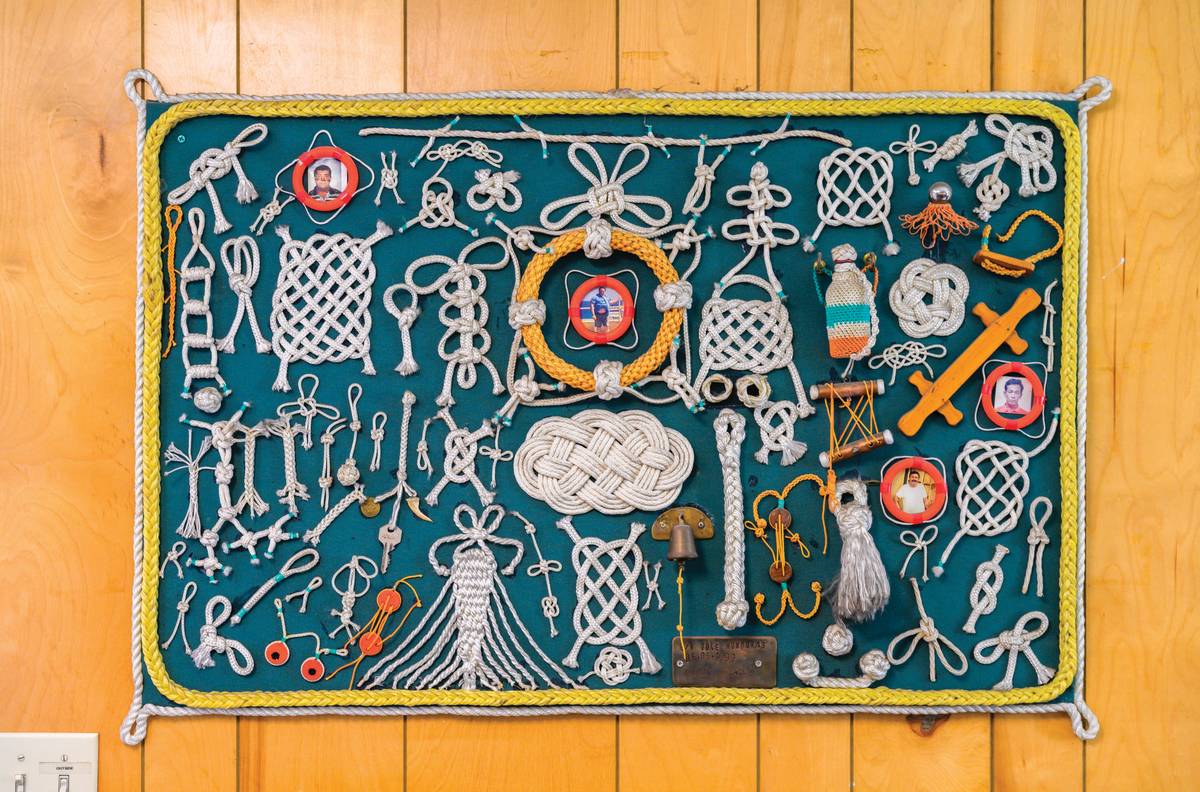 Every holiday season, Lassiter and his volunteers prepare for their biggest event of the year: Christmas at Sea. Throughout December, the program aims to provide every sailor who visits Delaware with a ditties” – shoeboxes packed and filled with essentials such as toothpaste, razors and soap, as well as useful items like playing cards, candy and maybe a hat and scarf.

During the pandemic, the center has provided Christmas gifts to more than 1,200 sailors each year, with each ditty box (named after the bags sailors use to store odds and ends) delivered by volunteers from the SCW directly to ships. Public donations of gift materials are accepted by the center from September to November.

“Too often these men operate as an invisible society,” says Lassiter. “But that doesn’t make them any less essential for all of us.”

During the pandemic, the center provided Christmas gifts to more than 1,200 sailors each year.